Casino Parties by Show Biz Productions, LLC is a full-service entertainment company with offices in We specialize in casino events for all types of clients.

We serve private individuals, companies, and nonprofit organizations in the states of Maryland, Virginia, and DC. Since 1979, our founder, Steve Phillips, has been instrumental in producing the most prestigious casino events throughout Florida and the Mid-Atlantic Region. Steve is one of the nation's pioneers in the Casino Fun Night gaming industry, and is also a founding member and former preside

We serve private individuals, companies, and nonprofit organizations in the states of Maryland, Virginia, and DC. Since 1979, our founder, Steve Phillips, has been instrumental in producing the most prestigious casino events throughout Florida and the Mid-Atlantic Region. Steve is one of the nation's pioneers in the Casino Fun Night gaming industry, and is also a founding member and former preside

Celebrate the start of the new year in style with Casino Parties & Special Events by Show Biz Productions! Throw a super fun, high-stakes casino night with us and make 2023 the best year yet!

Got a lucky number? 🍀

Looking to have some fun at your next private party, fundraiser, or special event? Call or email Show Biz Productions to get your personalized quote today! 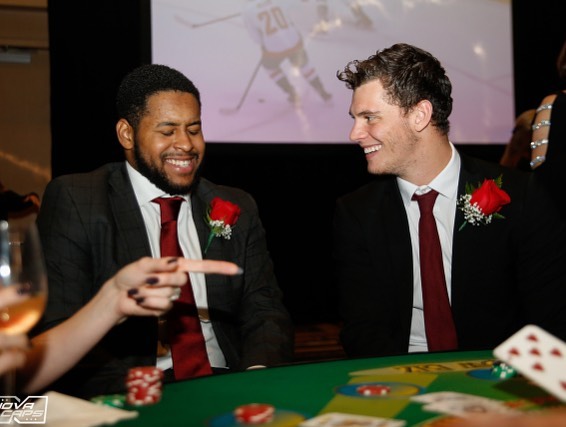 Nothing but fun at our casino tables! 🎲

Back in 2018, Show Biz Productions walks the stage and wins ‘Best Corporate Event of the Year’ by the National Association of Catering Executives (NACE)

It’s Throwback Thursday! Check out the Carnival Crew in 1982. Did you spot Steve Phillips, the president of Show Biz Productions, in the middle? 👀🎪

Looking for a simple game to start off your night at our casino tables? Check out the Wheel of Fortune where you place a bet on any dollar seen on the table. The wheel spins and you’ll multiply your money by that dollar amount!

Did you know that we have multiple themes for you to add props to your fun casino night events? 🎲

From Vintage Las Vegas to 1920's Speakeasies and more, bring your fedoras, flapper headbands & pearls to show off your 1920's look!

Afraid to start now and put some chips down on the roulette table? Hey, that’s why they call it beginners luck. And what’s great about Show Biz is that you have the fun with funny money without paying the consequences 😉

Did you know that we can make customized Funny Money for your party? With your personalized logo/image on it, your guests will be given a high dollar amount of your choosing to make them all high rollers and big spenders!

It’s Throwback Thursday!
Back in the 90’s, you could find Show Biz spinning the roulette wheel for America’s Most Wanted’s Corporate Holiday Party in Washington, DC

Test your luck at the craps table with our professional dealers to guide you! Don't know how to play craps? We have a great how-to video linked in our bio. Good Luck!

We are excited to announce our Adopt-A-Charity Project! From now until December 31st, you're able to get 25% OFF your event when you choose from our list of charities or your own to aid Hurricane Ian victims for your fundraising event! Send us a message for additional information.

Happy Halloween from your friends at Show Biz Productions! We wish you GOOD LUCK from all those ghouls and goblins out there! Maybe one of these superheroes will save the day! 🦸🏻‍♂️

We are now producing carnival programs for corporate, private, country clubs and social events. Our carnival booths are canvas and metal framed and it includes challenging games, red and white stripped attire, carnival operators and small prizes. They can be placed indoors or outdoors and can include our game room with a variety of challenging games, entertainers such as closeup magicians, caricature artists or fortune tellers can also be included in the programs. 🎪

Casino Parties by Show Biz Productions, LLC updated their info in the about section.

Casino Parties by Show Biz Productions, LLC updated their info in the about section.

In addition to our virtual casino party demos, we will also feature weekly demos of our virtual game shows every Thursday on Zoom:

To attend, RSVP at [email protected] 24 hours prior to a demo

Due to our expanded client base, we have decided to host weekly demos of our virtual casino parties every Thursday on Zoom:

To attend, RSVP at [email protected] 24 hours prior to a demo

Play Texas Hold ‘Em and a variety of other table games in real time with your friends, co-workers, and a live dealer.

Play online Texas Hold 'Em the way the game's meant to be played -- with live dealers and being face-to-face with your opponents. Host and play tournaments f...

Visit our new Virtual Events page to learn more about our state of the art and safe yet immensely exciting form of party planning!

How To Play Blackjack | Casino Gaming 101

How To Play Blackjack | Casino Gaming 101

Watch the first episode of our Casino Gaming 101 web series on YouTube and IGTV!

Learn how to play blackjack from one of the industry's expert. Casino Parties by Show Biz Productions founder Steve Phillips has spent the majority of his li...

Get back in the game with some much-needed excitement with Virtual Casino Parties by Show Biz Productions! All the action and authenticity of our casino-them...

Get back in the game with some much-needed excitement with Virtual Casino Parties by Show Biz Productions! All the action and authenticity of our casino-themed events LIVE from the comfort and safety of your own homes.

Using our Show Biz office/game room as a backdrop, Steve and Carla Phillips bring the entertaining world of Vegas style, casino party entertainment to your computer or phone screen. Learn the games, play fast-paced Roulette, Craps, and Blackjack tournaments, and engage in interactive team-building experiences unlike any other. All from the comfort of your own home.

Social distancing but still want to party with your friends or co-workers? Casino Parties by Show Biz Productions has your back! Introducing our new, worldwide line of virtual, interactive games.

We had a great time last night at the 6th annual Beth Tfiloh Men's Club Poker and Blackjack Tournament.

On Monday, July 1st, 2019, my mother, Saundra Phillips, passed away. In her honor, I thought I would write a post to talk a little bit about her and the huge impact she had on me.

An icon of the Baltimore entertainment industry, Saundra spent a large portion of her life as a local TV star, MC, and theatrical agent.

Through her company the Alan Agency (named for her first-born son), which she started in 1952, she was able to work with many big name entertainers such as Henny Youngman, Joan Rivers, Johnny Cash, John Denver, Robert Goulet, Jackie Mason, Willie Nelson, Gladys Knight and the Pips, Roberta Flack, just to name a few! She is the reason I got into the entertainment business in the first place.

Later in life, she opted for a second career as a Blackjack Dealer at Casino Parties by Show Biz Productions; in 2013, she won an award for Best Croupier (Dealer) at the age of 93!

She will be sorely missed by everyone who had the pleasure of knowing her.

We recently had the pleasure of providing our services to the Friends of the Israeli Defense Force. The two-night event (April 10th - April 11th) raised a significant amount of money to help a unit of the IDF that has had a large hand in providing humanitarian relief around the globe.

With entertainment provided by Casino Parties by Show Biz Productions, Zeta Phi Beta's "Betting On Blue: A Harlem Nights experience" was a tremendous success! Our casino tables were accompanied by a live band and a multitude of extravagant props and decor.

We were honored to partner with We Care Manatee on their fundraising efforts on January 26th at the IMG Golf and Country Club in Bradenton, FL. Funds were raised as well as a good time by all.

Steve Phillips wins the NACE Best Corporate Event of the Year Award for 2018. The event was for the Washington Capitals and it was attended by over 500 guests and raised over $400,000 dollars for charities. Below is a link to read the full article.

For their 100th anniversary, we treated Hertz to a ride unlike any other! Nearly a thousand guests were dazzled by our signature casino entertainment.

On April 14th, we produced an event for 600 guests at Martins West for the Community College of Baltimore County. The guests had a wonderful time at this fundraiser and the games were well received and fun for all.

Our state of the art warehouse has been renovated to include anything imaginable to make your special event a night to remember. Our eager crew awaits the opportunity to spring into action!

Contact us about booking these showgirls at your next special event.

Check out our new YouTube channel where we will be posting How-To videos and other exciting casino gaming-related content!
https://www.youtube.com/channel/UCM_T-o2YedI4CH7aBdtTFrg

CAPS Casino Night 2018 at the MGM Grand at National Harbor Maryland. Steve and NBC Sports on air personality Rob Carlin interviews CAPS players and head coach during this Facebook live segment. The event raised over $300,000 dollars for the Washington area charities. This event gave the fans a great opportunity to mingle with the players in a casual fundraising environment. A good time was had by all.

A great time was had by all for a good cause!

Be the first to know and let us send you an email when Casino Parties by Show Biz Productions, LLC posts news and promotions. Your email address will not be used for any other purpose, and you can unsubscribe at any time.

The agony of defeat.