From the East Bay Express:

Plenty of bands try to capture the desert rock sound, but local outfit Hornss gets its inspiration honestly.

Two of its three members (Mike Moracha and Nick Nava) grew up in the desert and got their start in the Palm Springs band Solarfeast, alongside ex-Kyuss/Evolution's End member Chris Cockrell. So although Hornss (also featuring drummer Bil Bowman) played its first show less than two years ago, the stoner metal band has already shared bills with the likes of YOB, 400 Blows, and Black Cobra (at Noise

Two of its three members (Mike Moracha and Nick Nava) grew up in the desert and got their start in the Palm Springs band Solarfeast, alongside ex-Kyuss/Evolution's End member Chris Cockrell. So although Hornss (also featuring drummer Bil Bowman) played its first show less than two years ago, the stoner metal band has already shared bills with the likes of YOB, 400 Blows, and Black Cobra (at Noise

Guardians of the Sun, by HORNSS

Guardians of the Sun, by HORNSS

Hey creeps! HORNSS are headed up the coast for a NW tour New Years weekend! Dec. 28th in Arcata at The Alibi, then up to Portland to play The Tonic Lounge Friday the 29th and then we hit Seattle Saturday the 30th at Darrells Tavern!! More details coming soon! Looking forward to playing with some amazing bands! This is our first trip up north, hope to meet some of you at the shows! Cheers!

If you missed it, The Obelisk premiered our new music video on Tueday! http://theobelisk.net/obelisk/2017/01/17/hornss-manzanita-video-premiere/

It's short at about two and a half minutes, but with their new video, San Francisco-based trio Hornss seem to stake a direct claim on their desert heritage. The clip for [...]

The funny thing is, we are all older than Al Cisneros! http://hellbound.ca/2016/12/hornss-telepath/

This heavy trio hails from the Bay Area, and one guy is a dead ringer for a younger, pre-bearded Al Cisneros, but if you’re...

The Quietus give a great review of our new album!
http://thequietus.com/articles/21370-hornss-telepath-album-review

I was weirded out that Target was selling our CD, but now that the Alt-Nazis are boycotting Target for supporting LGBT humans in some way or other, sure, go order our CD from f**king Target! -Mike

Thanks to NO CLEAN SINGING for the premiere and write up!

We have one more premiere at our site before stumbling into the weekend, and it's a massive ass-kicker from the SF stoner-doom crushers in HORNSS, off their new album "Telepath", coming next month via Ripple Music and on vinyl via STB Records:

Only a few of these left!
http://stbrecords.bigcartel.com/product/hornss-telepath-die-hard-edition

Psycho Las Vegas is a blast! Thanks everyone who came to our set

Heavy Planet has the exclusive premiere of "Atrophic", a tune off of our new album, released this Saturday on STB Records!

Exclusive premiere of a new song from HORNSS.

HORNSS -"Telepath" Die Hard edition! Limited to 100 units on a beautiful 180g pink and black swirl LP. Comes housed in a high density tip-on jacket with UV and foil stamping effects specific to the die hard edition only! All wrapped up in a tinted Mylar bag with printed lp cover. (Not shown) Exclusive artwork by Dennis Dread! This is one of the nicest lp jackets o have ever made!! On sale THIS Saturday August 27th 12noon est..
STBrecords.BigCartel.Com #HORNSS #DESERTROCK #Stonereock #STBfamily #STBrecords #DIY4DIY #DieHard

New HORNSS track added to the STB Records Mix Tape, from our new album "Telepath", out later this month. Check it out!

STB Records Mix Tape has been updated with an exclusive new track from HORNSS called "Atrophic". This is the first single off of the upcoming new album "Telepath" that will be available on digital and vinyl at the end of August!! Stream for free and enjoy a few hours of killer music!
https://stbrecords.bandcamp.com/album/stb-records-sampler

Track Listing for our new LP/CD out next month on STB and Ripple! Art by Dennis Dread 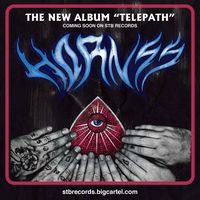 check out our new label! https://stbrecords.bandcamp.com/

Southern California, we are playing one show in Palm Desert for the Lo Sound Desert screening in April! Details soon!!

HORNSS are stoked to be included in the Psycho Las Vegas festival lineup. CHEERS!

Be the first to know and let us send you an email when HORNSS posts news and promotions. Your email address will not be used for any other purpose, and you can unsubscribe at any time.

Today's selection takes us back to the desert to revisit a venue, while short-lived, had an impact all it's own. Mario and Larry Lalli founded a venue in the early 90s known as Rhythm & Brews in Indio as a spot for touring bands as the city had no real venues around that time. Notably this creation of the venue would lead to the birth of a desert legend all it's own in FATSO JETSON. One of the many bands that performed at the venue would be Fu Manchu, roughly around 1993 and opening for Kyuss no less. Also special shout out to HORNSS for posting up this gig along with a bunch of gigs on their YouTube page. Dig it. -Cory Read up on Rhythm & Brews here! - https://riffipedia.fandom.com/wiki/Rhythm_%26_Brews
That said, speaking of HORNSS... HORNSS is our second selection and one of the latest band pages to be finished on Riffipedia. Formed by the duo of Mike Moracha and Nick Neva alongside drummer Bil Bowman, this heavy trio composes a doom sound with a punk and desert energy, with their latest album being 2016's Telepath. It's a groovy m***a for sure! Dig it. -Cory Read up on HORNSS here! - https://riffipedia.fandom.com/wiki/HORNSS
So who's the first band page we've got knocked out in 2020 so far? This time we've dug into the desert, specifically Palm Springs, for an obscure gem. Solarfeast was a short-lived mix of Desert Rock and Punk, fronted by one Chris Cockrell fresh out of his tenure with Kyuss and the first band to use his "Vic du Monte" moniker. Complimenting this lineup would be drummer Tony Tornay on drums, later becoming a founding member of FATSO JETSON. Lastly would be the guitar and bass duo of Mike Moracha and Nick Nava, both later forming The Jack Saints and then HORNSS. The band only released one 7" and then one album in their existence, 1995's "Gossamer" via El Camino Records, notably Brant Bjork's first label! Also definitely dig into HORNSS' YouTube channel as there's a ton of live footage not just of Solarfeast but also of bands performing in that surrounding time such as Kyuss and Melvins. Dig it. -Cory Read up on Solarfeast here! - https://riffipedia.fandom.com/wiki/Solarfeast
GOD DAMN IT!!! 😡🤬🥵 Another legendary venue gone! We had the pleasure of sharing the stage with Windhand, HORNSS and Connoisseur at the Hemlock thanks to SubliminalSF & Midnite Collective 🙏🏼 ・・・ Passed by in time to watch em tear down the Hemlock. #riphemlock #ripsf @ San Francisco, California #Repost @chadstab
Thanks for a great show finally found video.