FINE GRIND PRODUCTIONS is an event organization run by musicians for musicians!

Laid To Rest laying it down! Hard!

death is listening and will take the first one who screams, by deafened Last night was incredible! Mors Verum! Ischemic! A Flock Named Murder! Thank you all for being apart of this event. You all crushed it! And of course thanks to HEXIS for touring Canada and playing their first ever Toronto date! They’ll be back so don’t miss out as they put on one hell of a blackened fused hardcore metal performance! Everyone brought their own flavour to the smorgasbord and the end result was a dish best served with blood and sacrifice. Thank you to everyone who came together to help us pull this off! Dom, Steve, Jesse and everyone else at The Rockpile were extremely gracious with hosting responsibilities, so a huge thanks to you all!

Ischemic summoning all kinds of darkness!

Mors Verum kicking the night off in a huge way!

Apologies for the less than stellar audio, this was my first live interview in two years and I couldn’t do much about it. Probably should get some better equ...

Toronto! Hexis will be here next Thursday! Here’s another single!

They’re on their way. Don’t sleep on this. We are disheartened that we couldn’t have both SVNEATR & HEXIS on the same night but you can catch them both within a few days with some amazing support. Check out this review from their night in Nanaimo.

Our first foray into bringing an International act to our city. If you can’t make it to the Toronto show, here’s the full Canadian schedule. We have many friends hosting and playing in support of HEXIS so we fully encourage you all to attend whenever and wherever this is happening! You will not regret it! 🤘

New album, "Chinook" available May 28th.Preorder: www.svneatr.bandcamp.comVideo shot and edited by Jade Weekes.Lyrics: In the belly of the wolf Fester and wr...

Check out Vancouver's SVNEATR! They'll be in town June 19th with support from Sarin & AxMinister!

We're delighted to announce that SVNEATR have joined the Prosthetic family!

The black metal group are in the process of completing their third full-length album, and first via Prosthetic, with more news in due course 🌞

Alongside the signing announcement, SVNEATR are set to head out on a month long Canadian tour in support of HEXIS this June.

What an amazing night and we have everyone to thank for it! We want to thank all our friends for coming out early to support the bands and check out some new music! The Slime, Viridius & Active Arson brought their “A” game and we were humbled that you all agreed to be part of it. Especially Viridius, who drove out from Windsor. We’re stoked to have been the first to bring you guys out to Toronto!

Thanks to Ana, Joe and the staff at Owls Club for coming through for us and for providing an awesome space for everyone. This is a hidden gem and every band needs to check this place out! Not to mention, the alcohol prices will not break the bank!

Thanks to friends of all the bands! You came for your friends, stayed for the bands and really showed your support as a community. We would love to see your photos, videos and memories so please send them to us or comment on this post!

Tonight was a new beginning. FINE GRIND Productions is about community and getting together with amazing people. Where it can go from here is anyone’s guess and we sincerely hope everyone wants to see more of this. See some amazing bands and have a great time! See you all soon!

Active Arson are on fire!!!

The Slime kicking the night off!!!

Happy Monday everybody! Who's ready for some Toronto Hardcore The Slime! Check out their set March 6 at the Owl's Club!

Be the first to know and let us send you an email when FINE GRIND Productions posts news and promotions. Your email address will not be used for any other purpose, and you can unsubscribe at any time. 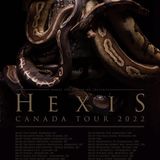 Other Event Planners in Toronto

*if you can't make the show but want to donate food, we'll be collecting items in Barrie to take with us*

See you soon, Toronto!!
Hella fun last night! Big props to FINE GRIND Productions and Burdizzo for making this happen!
Immense gratitude to the absolutely vibrant crowd who supported us yesterday in Etobicoke. Shout outs to HEXIS, and our friends in Ischemic and Mors Verum for their own crushing performances, and to FINE GRIND Productions for curating an absolute barn-burner of a night.

Photo cred: Ryan Miles Leblanc
Last night at the Rockpile was very special indeed. Huge thanks to FINE GRIND Productions , Mors Verum , A Flock Named Murder ,HEXIS , and each and every person who came out and supported the bands. 🤘🍻

The legendary Timothy Voldemars Johnston made this super trippy video of us from our show last night. 😎
x

Other Event Planners in Toronto (show all)