Ticket registration is now closed for the November 18th English Manor House Tea at Peacock Lane Home. For those who are attending we look forward to seeing you there.

You may want to check out our final menu below.

Please call the Peacock Lane Home if you have purchased tickets and you have questions: 614 846 4754.

Or check out the English Manor House web site at: englishmanorhouse.com/peacocklanetea/

For ticket reservations contact Peacock Lane Home Decor by phone, or by dropinng into the store at 615 High St, Worthington, Ohio.

For questions about the Peacock Lane Tea, or to schedule other public or private events contact Sharon at the number listed in Contacts on the englishmanorhouse.com web site.

To celebrate the holidays, English Manor House will present two afternoon holiday teas on November 11 and 18 at 2:00PM. The teas will be held at Peacock Lane Home Decor 615 N High St., Worthington, Ohio. Tickets can be obtained from the Peacock Lane Home store or by calling the store at 614 846-4754.

Reservations Afternoon Tea in the Garden on July 8th are now closed. Our next available Dates are:
:
August 12th - Wednesday
August 23rd - Sunday

Reservations Afternoon Tea in the Garden on Wednesday June 24 and Sunday June 28 are now closed.

Our next available tea date is Wednesday July 8.

Get tickets now as seating is limited. Ticket sales close 3 days before each event. Rain dates will be offered in case of inclement weather.

By Popular demand English Manor House is once again hosting Tea in the Garden this summer in conjunction with Blue Turtle Tea and Spice at Uptown on Main. Wednesday and Sunday tickets are available on dates shown on the Brochure below. A minimum number of tickets must be sold to hold the event. If the event is not held an alternate date will be offered, or your money will be returned.

English Manor House is hosting Tea in the Garden on Wednesdays and Saturdays in the Blue Turtle Tea and Spice Garden, in Westerville, Ohio. Join us for a relaxing afternoon with traditional English afternoon tea fare on fine china in a beautiful garden setting. Events take place from 2:00 to 4:00 pm throughout June, July and August. Tickets are $20, and ticket sales close 24 hours before the event. Contact Sharon at 614-218-6855, or visit www.englishmanorhouse.com for more information. 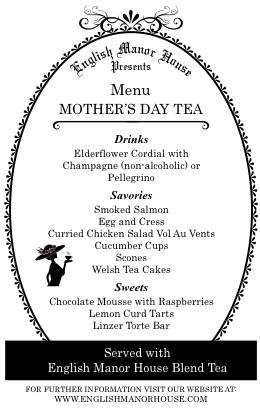 We have worked with Chef Sharon to create this fabulous Mother's Day Tea menu!

We are excited to have Margaret Fisher and Megan Paulsen as our flautists this year.

Megan Paulsen is a second year finance major at The Ohio State University. She was the recipient of the Patrick S. Gilmore award, a member of the OMEA District Honors Band and Regional Orchestra, and has been playing for eight years.

Sharon has worked with us to assemble a menu of Afternoon Tea delights worthy of the historic Bryn Du Mansion living room and our English Manor House table settings. We'll be posting the menu in a few days. 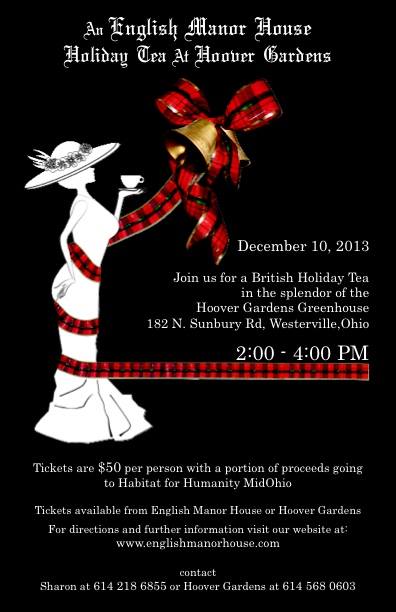 On December 10 from 2:00 – 4:00 PM English Manor House will host an afternoon holiday tea in the splendor of the Westerville Hoover Gardens greenhouse showroom among the Christmas trees, poinsettias, Christmas cactus and potted evergreens.

Tea and History at the Westerville Library, a perfect combination!

English Manor House is working with the Westerville Public Library to provide a Downtown Abbey type Tea on September 21, 2013 as part of the library's One Book, One Community, events program.

Tickets go on sale on August 17.

Hats and costumes will be welcome.

The tea will be open to the public, but only advertised to those on a library mailing list or visiting the Library.

If interested in detail, go to the library's September Calendar of Events and click the September 21st event to read more about the latest English Manor House Downton Abbey Like Tea Event.

Hope to see you there!

Be the first to know and let us send you an email when English Manor House posts news and promotions. Your email address will not be used for any other purpose, and you can unsubscribe at any time.