I Wish that we would all unite and put an end to this nightmare leave a better world for our kids.

Official video for Logic ft. Lowkey & Renee Soul - I WishSubscribe here to never miss a GlobalFaction video - http://bit.ly/subscribe2GlobalFactionLogic is a...

Its scary how relevant this song is right now

R.I.P [Revolution In Progress]Subscribe here to never miss a GlobalFaction video - http://bit.ly/subscribe2GlobalFactionBig Up Urban Monk on the [email protected]

"Exile is strangely compelling to think about
but terrible to experience.
It is the unhealable rift forced between a human
being and a native place, between the self
and its true home: its essential sadness
can never be surmounted.
And while it is true that literature and history
contain heroic, romantic, glorious, even triumphant episodes
in an exile's life, these are no more than efforts meant to overcome
the crippling sorrow of estrangement.
The achievements of exile are permanently undermined
by the loss of something left behind forever."

The detailed inner workings and patterns of operation of fascists in the neo-Nazi organization Patriot Front have come to light after a massive leak from their chat servers. The exposed communications show coordination with their leader Thomas Rousseau to deface murals and monuments to Black lives a...

"The definition of unnecessary-ness manifested... Say that we should protest just to get arrested, that goes against all of my hustling ethics, a bunch of jail niggas say it's highly ineffective."
-Lupe Fiasco, Freedom Ain't Free- 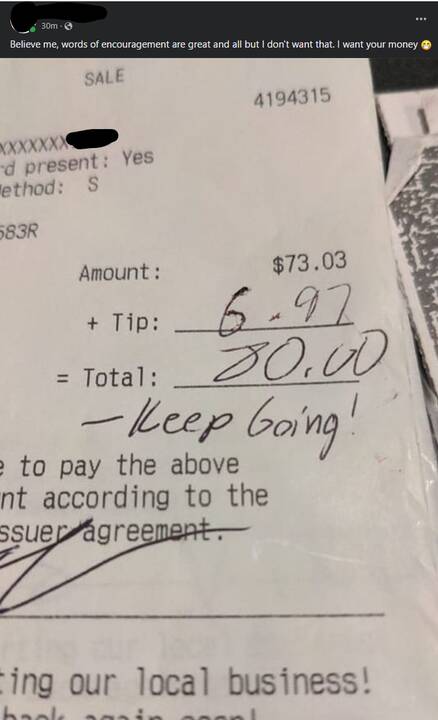 Saw this post from a friend of mine. So much disrespect to service workers.

The breach of a web provider favored by far-right extremists has dumped more than 150 gigabytes of private, revealing data.

“Green banking” is one of the ethical consumption fads of the day. No-one should be under the illusion, however, that it’s any more able to combat climate change and environmental destruction than any of the other failed consumer-oriented approaches of recent decades.

A child's family was torn apart because his father fell so far into Qanon that it separated the family and he has really had a rough time.
Many people offered help but he asked instead of helping him to share this site everywhere to help the people affected by the Parkland Shooting.

Please help by sharing this everywhere you can.
Thanks everyone!

Local Resources for Coping With Tragedy


Something to try and revitalize the LULZ and Anonymous itself. We can use the LULZ for our own laughter and amusement while still making a difference by pursuing immediate threats to the ideals of Anonymous.

Had more than a few interested so here it is.
😃

Anonymous has lost a sense of the LULZ and it's time we take it back. Go online and create internet mischief, have fun with the amusement of your targets ang...

GraphQLmap is a scripting engine to interact with a graphql endpoint for pentesting purposes.

Welcome to Last Resort On The Left 2.0's first livestream from the new page! We have no topics tonight if you think of some let us know! Hope you all enjoy the show!
Disclaimer This is an opinionated show, there may be some facts but we are not a news source just a talk show!

I finally got the Memorial Video made.
PLEASE TAG OTHERS & SHARE.

For all the fallen family over the years.

video is in memory of all the brothers and sisters we've lost over the years. I've tried my best to get everyone in this video and I've also tr...

Yo We gonna let city of Loveland CO get a pass for this sh*t or what?

“A little bloody, a little muddy, you know how it goes.” Those are the words of Loveland Police Officer Daria Jalali, said with a smile, after her sergeant a...

We Need A Revolution

Today we will take a look on Pollen Nation Magazine's FB live show at recent and not-so-recent allegations against sexual predators in Winona LaDuke's inner circle. These include most recently Nahko "the Bear," a musician popular with the white festival-going crowd, recently accused of sexual predation/assault of minors. And the ongoing lawsuit filed by a former Honor the Earth employee alleging Winona protected accused pedophile/sexual predator, Michael Dahl. Also, accusations posted on social media that Winona harbors another alleged pedophile Anthony Sul. And there are the persistent stories of her late father, Vincent LaDuke AKA "Sun Bear” a guru to his own "tribe,” of a sexual assault of a minor.

What to make of all this? Is it all coincidence? The result of being a public person? Or is there more to it? We'll take a look at what is publicly-known, published, and the lawsuit.

Be the first to know and let us send you an email when Anon Resistance Movement posts news and promotions. Your email address will not be used for any other purpose, and you can unsubscribe at any time. 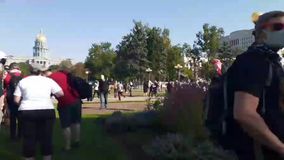 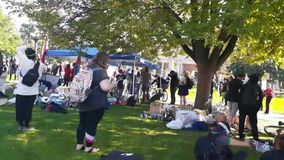 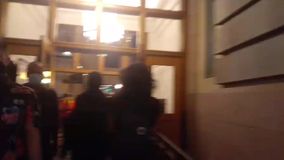 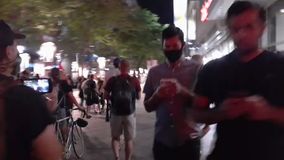 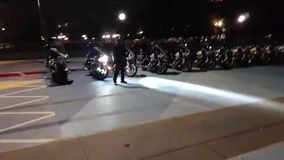 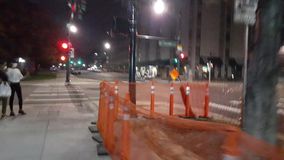 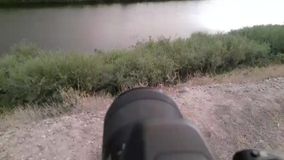 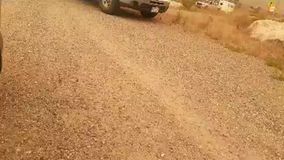 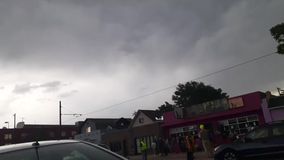 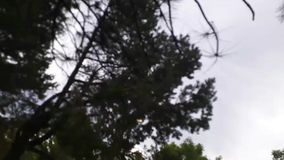 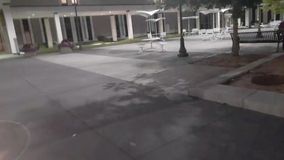 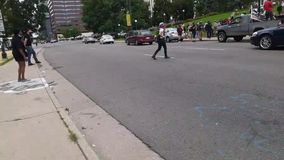 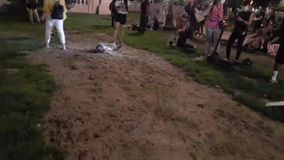 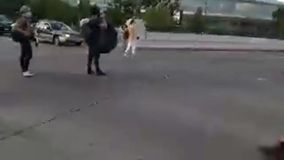 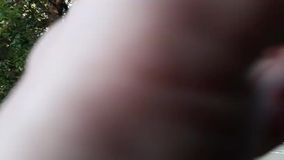 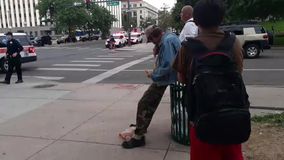 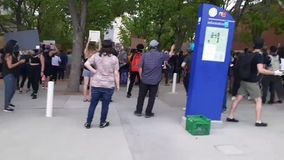 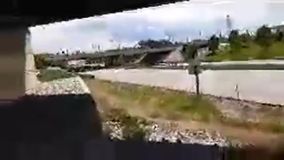 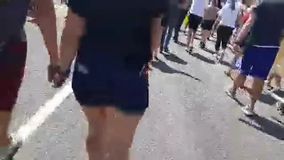 Anon Resistance Movement is a bigoted fascist mob.
This video offers a brief update on some of the political struggles taking place this winter as well as a summary of the solidarity movement of Rosa Nera squat against the far right nepotistic regime.
Fifty protestors gathered in sleet and subfreezing temperatures to mark the National Day Against Police ̷B̷r̷u̷t̷a̷l̷i̷t̷y̷ ̷ last night. (The last word is superfluous, since police = brutality.) We held banners and signs, chanted, ate pizza, and got lots of love from Aurora drivers and pedestrians passing by.

We also received some hate from a silver BMW sedan. It drove past us three times and shot at us with what we think were frozen paintballs. Multiple people were hit. Nobody was hurt. And nobody was intimidated in the least. Rightwing terrorism can’t stop us!

Pigs can’t stop us either! Two came by to warn us against “any criminal activity.” As soon as that phrase left their lips, we shouted them down and ran them off before they could utter another syllable. A few others watched us from the roof of the nearby Walgreen’s, though they may have been security or rightwingers.

Of course, the cops did nothing to prevent or hold anyone accountable for the only criminal activity that occurred—the drive-by paintball attacks against us.

And unfortunately 9News wasn’t there to keep us safe this time! 👾👾👾 JK JK 😂 We couldn’t resist trolling the far right with a poster that fans the flames of their dumb “9News is antifa” conspiracy theory.

One comrade was hit by a car in a crosswalk. It was an accident, not an attack by a hostile driver. We’ve come to expect such rightwing terrorism after 100+ car-attacks on Black Lives Matter protests across the country over the past four months.

We will not be silenced by state repression! We will not let our foot of the gas in the war against the racist police state! ✊✊✊🚩🚩🚩
Justice for Antonio Blackbear! Last night, in a last-minute mobilization, 125 gathered with Antonio Blackbear’s mother, wife, daughter, aunt, and other relatives to protest his murder by Denver Police two days ago.

We began with an Indigenous prayer and remarks from family members, including Lynn Eagle Feather, Antonio’s hunka (adopted) aunt, whose son, Paul Castaway, was also murdered by Denver Police five years ago.

At the site of Antonio’s murder, family members gathered around a candle-filled memorial and told the crowd about their lost relative. Antonio’s mother expressed how touched she was by the presence of so many who were outraged by the shooting. It was painful to witness yet another family reeling from the shock of the police taking the life of their beloved relative.

The march returned to the Capitol and happened to pass a Starbucks along the way, the windows of which proved to be an irresistible temptation. After most of us had dispersed and gone home, two truckloads of riot cops advanced on those that remained. They were clearly coming for a couple of protestors and we were unable to prevent them from doing so. Two were arrested and won’t be able to be bailed out until Monday. Donations for bail can be made to Colorado Freedom Fund: https://fundly.com/coloradofreedom

Thank you to Antonio’s family, Native Lives Matter, Anon Resistance Movement, and all who showed up against racist police violence!

Transcript; Choice Not Too Once Only

Being an choice one doesn't lead you success, it'ya forgotten until it realms of you, memory you as, it meant gave you luck, it had your eyes on view, thought it was, always drain you fear of tears, that's once kept ya chin up while those struggle kept ya alive, love once yet try another, it fade away from you it took alike to impress those you had chance to leaves into tears, hold ya tears, be brave not too, awhile those had you in their hands on the journey that's passed away from you, when you notice always been memory of you the moment you been remember, not choice one, only reason, you stood by it'ya mercy gain you attention lead you for answers, let shy tears attempt you further, you at, it'ya believes remarkable life it is, always drain you those are forgotten yet those get you to, growth in the moment of recognize you as memory are those worried about us, uselessness are focusing those beliefs, you made it, actually intention of the mindfulness, Once Choice Not Too, Much Trouble these Regret questions it'ya Forgotten that's Vision of course you drained surely na you Forgiven about it unless they don't give a care about us until you see us, draining our offer servings of the people who are too young suffer from the majority of the people, love by father, mother, children, and, friends including families in those used the willingness to guide to the people point sparkling their lighter lit fire above sky give these memorial to mentioned those are in grave are memories gave us the chance to growth an memory of us with we are chance to make an dream it'ya self believes that memory of you, and, me meant those are reminded to enemies embrace us to let's bring faith those who thought they failed to raise awareness of the better community we used to have in those gave an chance to bring an generation of the Child Renaissance that's once are adults lives our life's.